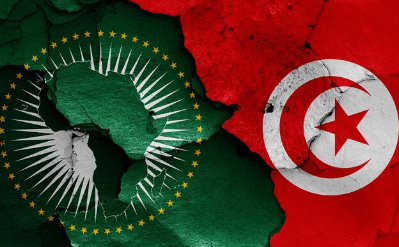 AU and Tunisia Flags (photo credit: alamy.com)
Throughout the past year, as President Saied sacked judges, jailed opposition politicians and stifled public debate on the drafting of the new constitution, the AU chose to remain silent. Indeed, after the president’s July 25, 2021 power grab, the continental union released only one brief and vague statement on the situation in Tunisia, expressing its commitment to the “Tunisian constitution”, “promotion of political dialogue” and “the need to respond to the legitimate aspirations of the Tunisian people”. [...] The continental standards for constitutional change require (1) legality and compliance with the letter and spirit of constitutional rules for reform, (2) a genuinely consultative and participatory process, including, possibly, a referendum, (3) a free and stable political environment, and (4) a deliberative process that eschews unilateral decisions and instead necessitates inclusion beyond a single dominant person or political group. In Tunisia, Saied simply disregarded the processes of reform outlined in the 2014 constitution and unilaterally adopted his own process, which allowed him to avoid any stringent requirements for the referendum, for instance, in the form of a minimum turnout requirement. [...] The AU has yet again squandered an opportunity to define itself as a union of rules, rather than merely a club of incumbents.
Read the full article here: Al Jazeera