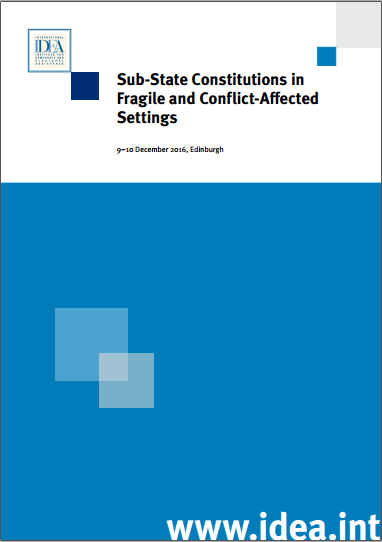 This workshop report follows the Third Edinburgh Dialogue on Post-Conflict Constitution Building that was held at the University of Edinburgh on 9–10 December 2016. This workshop, on ‘Sub-state Constitution Building in Fragile and Conflict-Affected Settings’, was organized by the International Institute for Democracy and Electoral Assistance (International IDEA), the Edinburgh Centre for Constitutional Law and the Global Justice Academy, in association with the Political Settlements Research Programme at the University of Edinburgh. The dialogue explored the process and design of sub-state constitutions in fragile and conflict-affected settings, and their role in the broader political settlement and/or peacebuilding process. This report will feed into a policy paper on sub-state constitutions in fragile and conflict-affected settings, which will be published by the end of 2017.