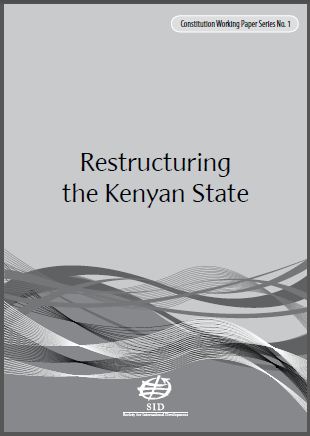 In 2010, on the cusp of Kenya’s new constitutional dispensation, SID embarked on a project called "Thinking, Talking and Informing Kenya’s Democratic Change Framework". Broadly stated, the objective of the project was both historical and contemporary: that is, to reflect on Kenyans struggles for a democratic order through a book project, and to examine the significance of a new constitutional order and its legal and policyimperatives, through a Working Paper Series.

Consequently, SID commissioned research on some of the chapters or aspects of the new constitution that require further policy and legislative intervention, culminating in ten Working Papers. These papers, mostly by Kenyan academics, are intended to help shapepublic discussions on the constitution and to build a stock of scholarly work on this subject.

Below is an abstract from Working Paper No. 1 "Restructuring the Kenyan State  ", published by the Society for International Development (SID), Regional Office for East & Southern Africa. The author of this paper is Dr. Joshua Kivuva.

"Since the repeal of Section 2(A) and the return of multiparty politics in Kenya in 1991, Kenyans have, for over 20 years, been trying to redesign and restructure their government. Despite the rejection of the Wako Draft, the quest by Kenyans for a new constitution did not stop. The 2007 post election violence not only convinced Kenyans of the inevitability of a new constitution but also showed the urgency of it. Persistent efforts for a new constitution have resulted in the 2010 Constitution of Kenya, which has not only significantly restructured the government and redesigned how the people relate to it, but has also established new systems of governance. This paper examines two things: first, the extent to which the governing institutions have been redesigned and restructured; and second, the extent to which the redesigned and restructured institutions have addressed Kenyans’ pressing social political and economic problems. The paper argues that the 2010 Constitution of Kenya has addressed many of the governance problems experienced in Kenya since independence, but more so has created new structures that will make the government more accountable and transparent, and which, together with the optimism of a new constitution, provide the country with a renewed sense of “rebirth” and a new beginning for the country."