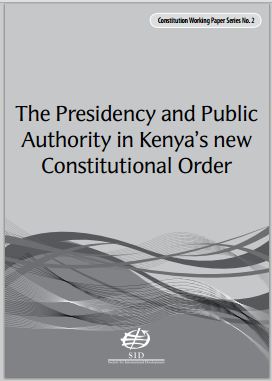 The Presidency and Public Authority in Kenya’s new Constitutional Order

Below is an abstract from Working Paper No. 2 "The Presidency and Public Authority in Kenya's new Constitutional Order", published by the Society for International Development (SID), Regional Office for East & Southern Africa. The author of this paper is Prof. Ben Sihanya.

"The role of the presidency in Kenya has animated and dominated popular and political discourses on constitution making, constitutional processes, and constitutional review and implementation, as well as political processes, since 1963. This study pursues a structured juridical-academic and policy discourse on the presidency in Kenya through four inter-related issues. First, the study reviews the evolution of the ofﬁce of the presidency in Kenya since 1963. This includes the Jomo Kenyatta regime (1963–1978) and the politics of power, resource distribution, and the rise of the imperial and populist presidency. Then came the Daniel arap Moi presidency (1978–2002), which sought to consolidate the imperial and populist tradition of the Kenyatta era. Mwai Kibaki’s presidency in the pre-coalition phase (2002–2007) was largely a continuum of the Kenyatta–Moi administrations. Finally, precipitated by the urgent need to stem the violence following the 2007 presidential election, the Grand Coalition Government of Kibaki’s Party of National Unity (PNU) and Raila Odinga’s Orange Democratic Movement (ODM) (2008–) ushered in a semi-presidential system without parallel; in these years the exercise of presidential power became somewhat circumscribed. Second, the paper explores the various types of bureaucracy based at State House or centred on the presidency. These include the Cabinet, the provincial administration and State House. Third, it assesses the impact of the presidency and the associated bureaucracy on public authority and public administration. Finally, the study evaluates the impact of the Constitution of Kenya 2010 on the presidency, public authority and public administration. It reviews the normative, institutional and structural checks and balances, including the provisions of the Bill of Rights and decentralization (or ‘devolution’), and their effect on the presidency and the exercise of public authority. Further, the study assesses other constitutional institutions like the Judiciary, Parliament and the restructured Executive. These are explored in light of the impact these institutions are likely to have on the presidency, as well as on the exercise of public power and public authority in Kenya generally."