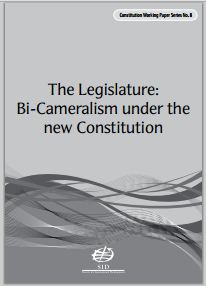 The Legislature: Bi-Cameralism under the new Constitution

Below is an abstract from Working Paper No. 8 "The Legislature: Bi-Cameralism under the new Constitution", published by the Society for International Development (SID), Regional Office for East & Southern Africa. The author of this paper is Kipkemoi arap Kirui.

"The aims of this paper are threefold. First, the paper retraces the history of the Kenyan legislature before and after independence tracking the various transformations spanning a century of its existence. These transformations have been largely characterised by two competing forces: one epitomized by a strong executive seizing power from other arms of government, and the other by pro-reform forces pushing for an expanded democracy, better governance and accountability, and the promotion of rule of law. They agitated for electoral, legislative and constitutional reforms resulting in the reduction of the powers of the president, the re-introduction of multiparty democracy and the expansion of people’s democratic space and shifting power from the presidency back to other arms of the state, including parliament, and by extension to the people. Second, the paper will critically examine the reasons why Kenya, after only four years of independence, reverted to a state with a unicameral parliament. It is worth noting that at independence the framers of Kenya’s Constitution opted for a Westminster-style bicameral legislature under a quasi-federal system. It is suggested that the experience gained from 1963, to 1967, when Kenya had a Senate, is crucial in redesigning the current bicameral legislature under the 2010 Constitution. Finally, this paper looks at the changes envisaged by the new Constitution of Kenya, and in particular the provisions relating to the reintroduction of the Senate. The paper critically examines the re-designed structure of the legislature and how the different components will interact with each other."