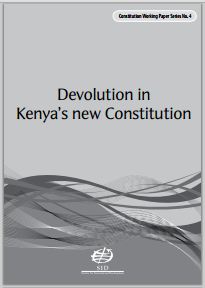 In 2010, on the cusp of Kenya’s new constitutional dispensation, SID embarked on a project called "Thinking, Talking and Informing Kenya’s Democratic Change Framework". Broadly stated, the objective of the project was both historical and contemporary: that is, to reflect on Kenyans struggles for a democratic order through a book project, and to examine the significance of a new constitutional order and its legal and policyimperatives, through a Working Paper Series.

Consequently, SID commissioned research on some of the chapters or aspects of the new constitution that require further policy and legislative intervention, culminating in ten Working Papers. These papers, mostly by Kenyan academics, are intended to help shapepublic discussions on the constitution and to build a stock of scholarly work on this subject.

Below is an abstract from Working Paper No. 4 "Devolution in Kenya’s new Constitution", published by the Society for International Development (SID), Regional Office for East & Southern Africa. The author of this paper is Othieno Nyanjom.

"Kenya’s 2010 Constitution declares equity to be an underlying principle of governance in the country, which is consistent with its provision for devolution. While the institutionalization of equity is welcomed by the previously marginalized, this is often not the case with the beneﬁciaries of the old order. In order to efﬁcaciously implement the letter and spirit of Kenya’s constitutional devolution, it is important for Kenyans to understand that while nature vastly differentiated their country, successive governments did little to exploit opportunities for providing the scope for nationwide development. This failure inspired many Kenyans’ sustained demand for devolution during the two-decade constitutional review saga. Kenya’s search for cohesive national development will fail if there is not a nationwide appreciation of the history of our contemporary inequalities, which are at the root of Kenyans’ great hope in devolution."