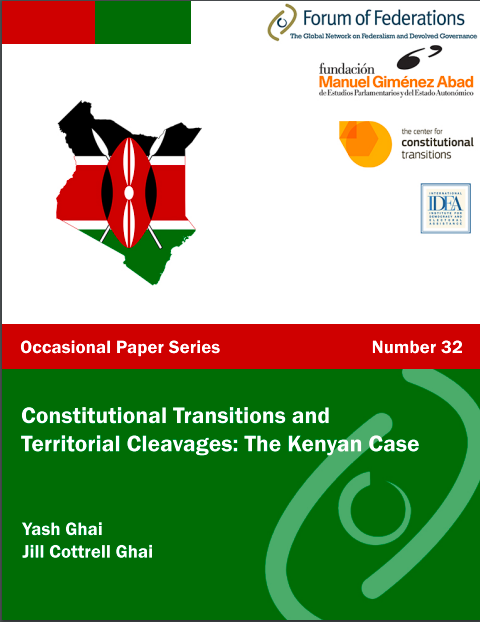 Forum of Federations, Fundacion Gimenez Abad, International IDEA and The Center for Constitutional Transitions are proud to present the 8th Occasional Paper which explores the Kenya’s constitutional transition.

Kenya grew out of British annexation of territories of a number of communities, and immigrants from India and Britain. As independence drew near, Britain agreed to the demand of minority communities– against strong opposition from larger communities – for federal arrangements under which the regions would have power on matters of special concern to minorities. But soon after independence, regional governments were abolished, leading to a highly centralised system. Authoritarian rule, massive land grabbing, loss of rights, and marginalisation of minorities followed.

For long, the government resisted demands for constitutional reform, but eventually conceded, under pressure from civil society – and from western governments after the cold war. Agreement was reached on principles for reform and a constitution review commission was established, in 2000. This Occasional Paper focuses on the work of that commission and the National Constitutional Conference that followed, adopting a draft constitution. It concentrates on issues surrounding devolution of power, on who demanded it and how the issues were resolved. By the time of the Conference in 2003-4, there was a new president. He reneged on promises of reform, and imposed changes, which weakened the draft constitution, including its provisions on devolution. This revised draft was rejected in a referendum in 2005. Serious violence, driven by ethnic incitement, followed allegedly rigged elections in 2007. International mediation led to a coalition government and the resumption of constitutional reform.

In August 2010, a new constitution, based largely on the drafts of the commission and national conference, including on devolution, was adopted in a referendum.