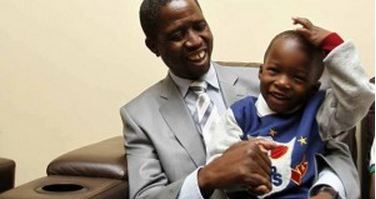 President Edgar Lungu
<p>Patriotic Front President Edgar Lungu has taken the oath of office as Zambia’s sixth President with a promise to deliver a new constitution.</p><p>Speaking after being sworn-in by acting Chief Justice Lombe Chibesakunda before a packed National Heroes stadium this morning, President Lungu says he will definitely deliver a people driven constitution.</p><p>Mr Lungu says to demonstrate his commitment to delivering a people driven constitution he has with immediate effect appointed Constitutional Lawyer Ngosa Simbyakula as the new Justice Minister to oversee the enactment of the new constitution.</p><p>President Lungu says other members of his cabinet will be announced tomorrow during a press conference at 09:00 hours.</p>
Read the full article here: UK Zambians