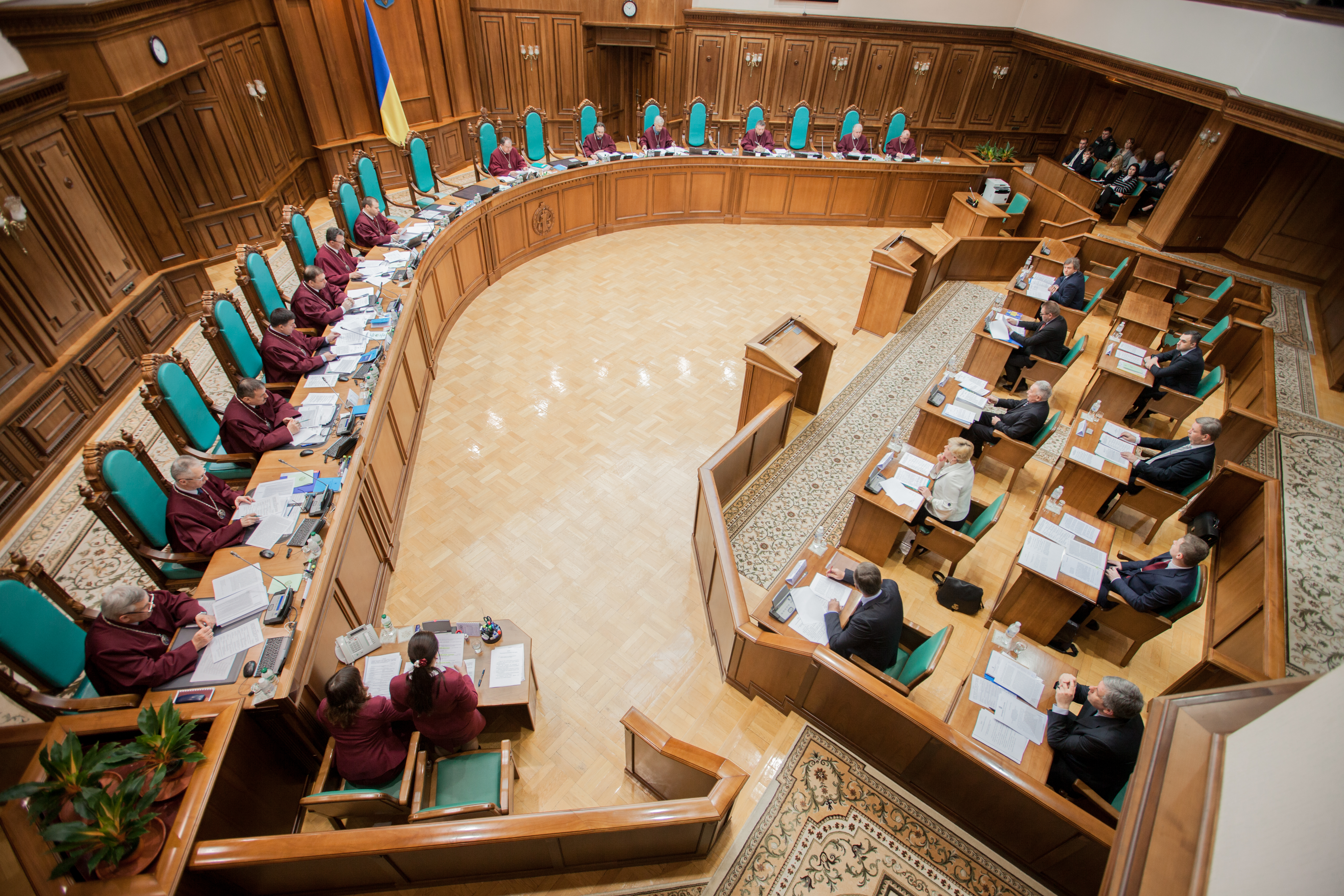 More than two decades after its establishment, the Constitutional Court of Ukraine has struggled to shake of political control and to enforce constitutional standards. The latest reforms enhancing the accessibility of the Court, protecting judges from politically motivated dismissals, and ensuring a more competitive appointment process lay the ground for an independent and effective arbiter. However, the lack of clarity and details may undermine the success of the Court and should therefore be addressed – writes Ms Kyrychenko.

The Constitutional Court was initially established in the Ukrainian Constitution of 28 June 1996, adopted following the collapse of the USSR. The Court has 18 members, six appointed each by the President of Ukraine, the Parliament and the Congress of Judges. Despite its long existence, however, the Court has been unable to ensure the protection of the constitutional framework. A weak tradition of constitutionalism among both society and dominant political parties and elites undermined the independence of the Court, which largely served the transient interests of certain groups or personalities. Most notably, this fundamental problem was manifested during the regime of Viktor Yanukovych. Shortly after taking hold of power in 2010, Yanukovych manipulated the Court to significantly expand presidential powers by reinstating the original version of the Constitution that existed before the 2004 constitutional reforms, which had weakened the powers of the presidency, in particular by removing presidential powers to appoint the prime minister and to dismiss cabinet members. In order to influence the Court, the authorities primarily relied on two instruments: forced resignations and the appointment of politically loyal judges.

In the aftermath of popular mass protests (Revolution of Dignity) that toppled Yanukovych in early 2014, there was an urgent need to restore constitutional legitimacy and to carry out constitutional reform. Parliament reinstated the Ukrainian Constitution of 8 December 2004, and dismissed the parliament-appointed judges of the Constitutional Court, because of their approval of the unconstitutional changing of the Constitution in 2010. This was, however, a temporary measure and judges appointed by the President and by the Congress of Judges of Ukraine remained in office.

A high public distrust in the judiciary, low effectiveness of the Constitutional Court, and its political dependence have fueled the demands and support for constitutional reform.

In 2015, the current President of Ukraine, Petro Poroshenko, announced his support for constitutional reforms to ensure judicial independence and introduced a draft Law ‘On amendments to the Constitution of Ukraine’ in Parliament. A Constitutional Commission, a presidential advisory body appointed after nominations from various actors, prepared the draft. In June 2016, the President secured the necessary parliamentary majority to adopt the proposed amendments.

In accordance with suggestions of civil society organizations, which the new authorities took into account in the early years after the Revolution of Dignity, the reforms to the Constitutional Court were adopted alongside reforms affecting courts of general jurisdiction. A high public distrust in the judiciary, low effectiveness of the Constitutional Court, and its political dependence have fueled the demands and support for constitutional reform. Nevertheless, the judicial branch opposed some of the reforms, as they will entail the liquidation of higher courts and the reconstitution of the judiciary, particularly affecting judges of the Supreme Court and Ukrainian courts of appeal.

The constitutional changes regarding the status of the Constitutional Court are aimed at strengthening its independence. In particular, the amendments establish a new procedure for the appointment and dismissal of judges, enhance the powers of the Court, provide for financial guarantees, ensure the continued work of the Court, and recognize the direct access of individuals and legal entities to the Court.

The new Constitutional Court largely retains most of the pre-reform powers (except for the authority to interpret ordinary laws), such as the power to interpret the Constitution, to review international treaties, the laws and acts of parliament, the president, and the government, and legal acts of the parliament of the Autonomous Republic of Crimea, and to decide on the regularity of the impeachment of the president. The Court may consider disputes among the government, parliament and the president in the consideration of issues of unconstitutionality of laws and acts. Other than the review of acts of the parliament of the Autonomous Republic of Crimea, the Court is not involved in the resolution of disputes between the central government and local authorities. The court also has the power to review the compatibility of proposed constitutional amendments with substantive and procedural constitutional requirements. In addition, the Court will have new powers to provide opinions on the constitutional compliance (constitutionality) of questions that are proposed by popular initiative to be put to referendum.

Individuals will for the first time have direct access to the Constitutional Court.

The implementation of the constitutional complaint procedure is likely to increase the burden on the Court. Accordingly, the reforms have adjusted the internal structuring of the Court. Prior to the reforms, the Court took final decisions in plenary sessions. The Court will now have a Grand Chamber (consisting of all judges), two Senates of nine judges each, and six boards of three judges each.  The Grand Chamber has the plenary authority, while the Senates have final authority on constitutional complaints.

The procedure for the appointment of judges of the Constitutional Court was highly political, which inevitably influenced its institutional independence. For example, from October 2005 to August 2006, the Court’s activities were disrupted when the Verkhovna Rada of Ukraine initially failed to appoint its share of judges, and then refused to swear in the judges appointed by other organs. Due to its incomplete composition, the Court was unable to exercise its powers. Political loyalty obviously dominated appointments by political parties (parliament, president), often at the expense of professionalism, integrity, status and recognition within the legal community.

Following the reforms, judges of the Court must be selected through competitive processes.

In order to reduce political discretion in the appointment of judges, the new provisions provide for compulsory selection of judges to the Constitutional Court. Crucially, under the revised law on the Constitutional Court, judges of the Court must be selected through competitive processes. Accordingly, the process for the selection of candidates appointed by the President of Ukraine will be carried out by a competition commission to be set up by the President. The parliamentary Standing Committee on Legal Policy and Justice, which may include members of the opposition, will conduct the competitive process for those to be appointed by Parliament; while the Council of Judges, established and composed by the Congress of Judges, will conduct the competitive processes for the selection of those appointed by the Congress.  Each selection organ is required to provide the names of at least three times as many candidates as available vacancies.

Unfortunately, the constitutional reforms do not comprehensively regulate the procedure for the competitive selection of judges. For instance, the appointing organs have the authority to disregard the recommendations of the relevant selection committee. The law is not clear on what will happen in instances where an appointing organ rejects all the recommendations of the selection committee. Coupled with a possible lack of transparency, this could undermine the value of the new competitive process. Crucially, the appointing bodies will have significant control over the composition and operation of the organs in charge of the competitive selection process. The recommendations of the Venice Commission where appointments in Parliament and the Congress of Judges would require qualified majorities were also not endorsed.

The power of dismissal will instead be exercised by the Constitutional Court itself, which must approve dismissals with at least two-thirds of all the judges.

Politically motivated dismissals or threat of dismissals of judges have been frequently employed to pressure the Constitutional Court. In particular, Parliament and presidents have used their powers to dismiss judges of the Court, often based on the vague ground of ‘breach of the oath’ by a judge. In accordance with the recommendations of the Venice Commission, the bodies appointing judges of the Court (Parliament, the Presidency and Congress of Judges) are denied the right to dismiss them. The power of dismissal will instead be exercised by the Constitutional Court itself, which must approve dismissals with at least two-thirds of all the judges (≥12 of 18 judges). In addition, ‘breach of the oath’ is no longer a ground for the dismissal of judges.

Moreover, the new legal framework has deprived parliament of the authority to block the work of the Court by refusing to swear in appointed judges. Accordingly, under the reforms, a new judge will make an oath not in the Parliament, but at special plenary meeting of the Court itself. This is in line with Venice Commission recommendation to strengthen guarantees of the continuity of the Court.

The reforms will contribute to gradually reducing the political dependence of the Court and to enhancing the nurturing of an independent constitutional justice system.

Overall, the constitutional amendments of 2 June 2016 and the new law on the Constitutional Court will contribute to gradually reducing the political dependence of the Court and to enhancing the nurturing of an independent constitutional justice system. In particular, the recognition of the individual constitutional complaint procedure should contribute to the protection of fundamental rights. The new grounds for and process of dismissal of judges will also help insulate judges from politically motivated pressure or reprisal. Nevertheless, despite the addition of a competitive selection process, the procedure for the appointment of judges of the Court has largely remained the same, with the final appointing organs exercising a great deal of influence over the organs in charge of selecting candidate through a competitive process. While the selection of candidates for positions of judges of the Court is now compulsory and must be competitive, the very general nature of these provisions could allow the distortion of the implementation of the legal standards. There is therefore need to address these potential flaws.