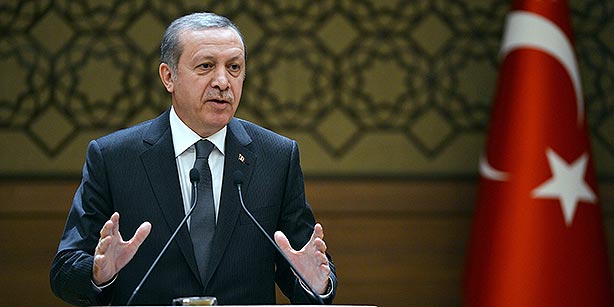 Turkish President Recep Tayyip Erdoğan (photo credit: DHA)
<p>Turkey&nbsp;can undertake separate referenda for a new Constitution and a switch to an executive-style&nbsp;presidential system, President&nbsp;Recep Tayyip Erdoğan&nbsp;told reporters on his private plane en route from an official visit to Turkmenistan.</p><p>Speaking to a group of journalists aboard the presidential jet, Erdoğan said an executive-style presidency or a semi-presidential system would allow for rapid decision-making. “Secondly it is important that we remove double-headedness [in the governance of the state].”&nbsp;<span style="line-height: 20.4px;">“If they [opposition] want to take this [proposal] to the people they can do so. I believe that a huge proportion of the people will say ‘yes' to a new Constitution,” he said.</span></p>
Read the full article here: Today's Zaman