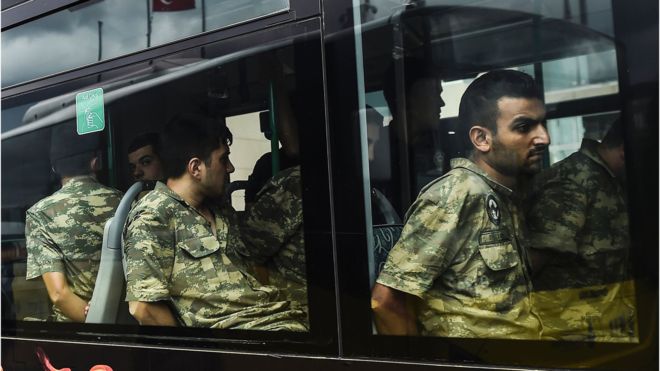 Soldiers detained for suspected coup involvement are brought to court in Istanbul (photo credit: AFP)
<p><span>ANKARA</span>&nbsp;Turkey plans to abolish military high courts by amending the country's constitution, a senior lawmaker in the ruling AK Party said on Friday, part of government efforts to boost civilian control over the armed forces and the judiciary.<span style="line-height: 20.4px;">&nbsp;</span></p><p>The reforms will also aim to unite Turkey's high courts under a single roof, Ahmet Iyimaya, the chairman of parliament's justice commission, told Reuters in an interview. It will not include controversial projects such as the introduction of an executive presidency, he said.<span style="line-height: 20.4px;">&nbsp;</span></p>
Read the full article here: Reuters/First Post