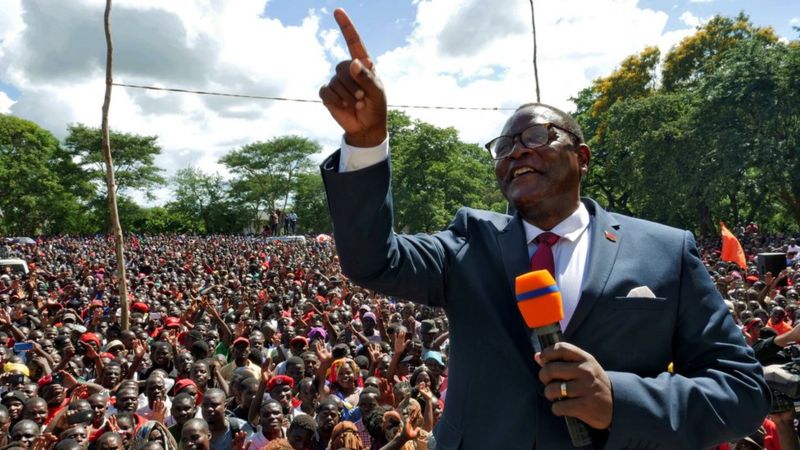 Debates on reducing presidential powers in Malawi are not new. Recently, these debates have resurfaced with renewed vigour. Contestation over the appointment of the recent cabinet demonstrates the topicality of the reform drive. The success of any attempted reforms, however, will depend on the extent to which the Tonse Alliance, opposition groups and CSOs generate and sustain momentum in support of the reform agenda– writes professor Mwiza Nkhata.

Lazarus Chakwera ascended to the presidency as the torch-bearer of the opposition Tonse Alliance, a grouping of nine political parties that came together with the primary objective of dislodging the incumbent Democratic Progressive Party. The alliance was formed following the judicial nullification of the presidential elections held in May 2019. In addition to the nullification, the courts also overruled the plurality electoral system for presidential elections and replaced it with the 50%+1 majority runoff.

On the campaign trail, the Tonse Alliance promised to trim presidential powers once in office. Chakwera reiterated the promise during his inauguration. As a reflection of the commitment, on 8 August 2020, during an address to the nation, Chakwera announced that he was working on delivering on the promise of taming Malawi’s presidency. This rhetoric and posturing appears to exude the necessary political will to finally review and, probably trim, presidential powers.

Trimming presidential powers in Malawi, however, is a controversial subject. Poignantly, Chakwera is not the first president to have made this promise. His predecessor, Arthur Peter Mutharika, made a similar promise during his campaign in 2014 but failed to deliver on it.

Chakwera faces a perennial challenge and it relates to governance broadly, and not just the presidency. Concerning the presidency, specifically, the challenge lies in finding a balance to ensure an adequately empowered office to run national affairs without at the same time creating an overpowering institution that domineers over everyone and everything. Malawi’s post-independence history offers abundant examples of the dangers of an overly strong presidency.

The Constitution of the Republic of Malawi, arguably, leans towards the creation of a powerful presidency. Unsurprisingly, some of the governance challenges that the country has faced are attributable to the presidency having a hand in too many governance-related issues.

The Constitution, among other things, empowers the president to assent to bills, convene and preside over cabinet meetings, pardon prisoners and to appoint commissions of inquiry, as well as to make ‘such appointments as may be necessary in accordance with powers conferred upon him or her by [the] Constitution or an Act of Parliament’. Further confirmation of the broad ambit of the president’s powers is evident in section 89(5) which permits him/her to ‘exercise all other powers reasonably necessary and incidental to the functions of his or her office in accordance with this Constitution’.

In terms of the presidential power to make appointments under the Constitution, at least three patterns are discernible. First, the president has been given absolute powers to make certain appointments, for example, the Attorney General and ministers. Second, the president can make appointments, but these must be confirmed by the Public Appointments Committee (PAC) of the National Assembly, whose composition must reflect the composition of the Assembly. These include the Director of Public Prosecutions, the Auditor General and diplomatic staff. A variation of this power requires the National Assembly to confirm the president’s appointment of the chief justice. Third, the President can make appointments on recommendation of designated bodies. For example, although the President appoints judges of the High Court, this is on recommendation of the judicial service commission.

Notably, some presidential powers are premised on statutes and not the Constitution. For example, although the president is the Chancellor of all public universities, this role is created by the respective statutes establishing the universities.

In his address of 8 August, Chakwera provided hints on some of the powers that may be reviewed. A loose analysis shows that there are two broad categories of powers vested in the presidency, which can be termed ‘substantive powers’ and ‘ceremonial powers.’ Arguably, the presidency stands to lose very little if it merely ceded the ceremonial powers, such as those that designate the holder of the office as chancellor of all public universities. It is, therefore, to the substantive powers that focus ought to be paid.

Against the above background, the pertinent question for Chakwera is whether he will, for example, consider tampering with the powers of appointment of ministers or even the powers to appoint senior civil servants, such as the Attorney General. In terms of the appointment of ministers, past presidents have fully exploited the constitutional latitude to appoint ministers and create new ministries at will. This has been done in total disregard of the country’s capacity to sustain what have, patently, been bloated cabinets, including Chakwera’s much criticised cabinet.  Admittedly, a president requires latitude to appoint, as ministers, individuals that he/she believes would aid him fulfil his/her manifesto but now may be the time to introduce a cap on the number of ministers that a president can appoint. Since independence, the country has experimented with various sizes of cabinet and it should be possible to agree on an ideal cabinet size.

Transparency in appointment processes through public interviews and enhanced role for the PAC could go a long way in checking presidential appointment powers.

The appointment of senior civil servants, however, demands a different approach considering that it is not political expedience that ought to govern these appointments. Whatever interventions Chakwera may have in mind, two things could be useful. First, the presidency should consider diluting the absolute powers of appointing certain officer bearers. Second, transparency in the appointment processes should be prioritised and this may include subjecting nominees to public interviews.

As currently structured, the PAC, though created under the Constitution, operates under a framework developed in the Standing Orders of the National Assembly (the Standing Orders). Essentially, therefore, details as to the operation of the PAC are in subsidiary legislation. Given the importance of the PAC, this is not ideal. The proposed review of presidential powers, it is argued, should include a commensurate review of the framework governing the PAC to enable it to play a more central role in mediating presidential appointments. One area that could be given special consideration is conferring a binding effect on some of the determinations and recommendations of the PAC. It will be pointless to give the PAC a greater and enhanced role when its determinations and recommendations can simply be ignored. The national debate should thus centre on determining which powers the president should exercise in conjunction with the PAC.

Legislative and constitutional amendments are necessary to carry forward Chakwera’s proposed reform agenda. Under the Constitution, certain amendments are procedurally cumbersome and require a referendum or a legislative supermajority. The bulk of the provisions dealing with presidential powers under the Constitution can be amended without a referendum through a supermajority in the National Assembly under section 197 of the Constitution. In this sense, therefore, all that Chakwera and the Tonse Alliance need, is to muster the necessary parliamentary supermajority to support their proposals. While the Tonse Alliance does not immediately have the required parliamentary majority, the proposed reforms could garner support across the political divide.

As for the agency to drive the technical work forward, the default institution of choice would be the Malawi Law Commission. As a starting point the Commission could be tasked with conducting a thorough review of the powers vested in the presidency and making appropriate recommendations. The Commission is to be preferred since it possesses the pedigree for law reform work and, in so far as constitutional amendments are concerned, it could easily build on its previous review of the Constitution.

Of concern to the proposed reforms is the probable effect of ‘alliance politics’. As earlier pointed out, nine political parties came together to secure victory in the re-run of the presidential election. Chakwera’s vice president, for example, is from a different political party. Chakwera’s first cabinet is also demonstrative of the compromises that he had to make to accommodate various members of the alliance. The effect of ‘alliance politics’ on the proposals to trim presidential powers is not yet certain. But, like in other instances of governing in an alliance, there is always risk that such an important agenda may not have the full support of all its members. In the case of Malawi, however, solace can be had from the fact that both the president and the vice president, notwithstanding their different political parties, have publicly spoken in support of these reforms.

Although Chakwera, thus far, has been consistent in agitating for trimming presidential powers, specifics about the impending exercise have yet to emerge. There is still uncertainty, therefore, as to how far reaching the planned reforms will be. Key to the planned reforms, however, should be the desire to enhance transparency and accountability in the operations of government at all levels. Chakwera should not make the mistake of being caught in pandering to the rhetoric of trimming presidential powers without a clear plan. The Constitution already establishes the primacy of transparency and accountability, among other values, and these should be used to inform the entire reform process.

The nation stands to benefit from a sober and careful review of the powers vested in the presidency.

The actual momentum for driving this process must, first and foremost, come from within the Tonse Alliance and particularly through an unequivocal support and endorsement of the reform path propagated by Chakwera. The opposition and civil society organisations must also have a role in the process. Opposition politics in Malawi, since the re-introduction of multiparty politics, have tended to be very fickle. Often times the opposition has failed to consistently stand for particular positions and ended up being swayed by ephemeral conveniences. Although the opposition has yet to come out clearly as regards the proposed reforms, at stake here is an opportunity to participate meaningfully in a crucial national discourse. Similarly, civil society organisations must, among other things, draw public attention to this discourse and also, on behalf of the public, monitor progress to ensure that the reforms are undertaken.

It remains to be seen if Chakwera will walk the talk on trimming presidential powers. One fact, however, is inescapable and this is that the nation stands to benefit from a sober and careful review of the powers vested in the presidency.