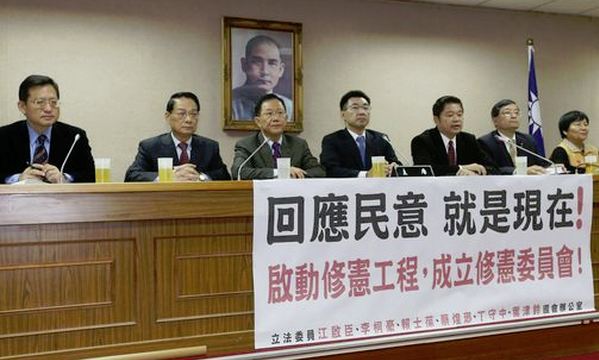 Taiwan: Proposal to Amend Constitution finds legislative support across parties
<p><span>&nbsp;A proposal has been completed as a first step toward forming a cross-party legislative committee to push for amending the Constitution, legislator Chiang Chi-chen of the ruling Kuomintang (KMT) said Thursday.</span></p><p><span></span><br><br><span>The proposal, which has also received support from many Democratic Progressive Party (DPP) heavyweights, could be sent to the Legislature floor as soon as Dec. 19, said Chiang.</span></p><p><span></span><br><br><span>He listed "many constitutional amendment issues" in need of being addressed, including possibly changing the current semi-presidential system -- where authority is concentrated between the popularly elected president and his appointed premier, the head of the Cabinet.</span></p>
Read the full article here: Focus Taiwan