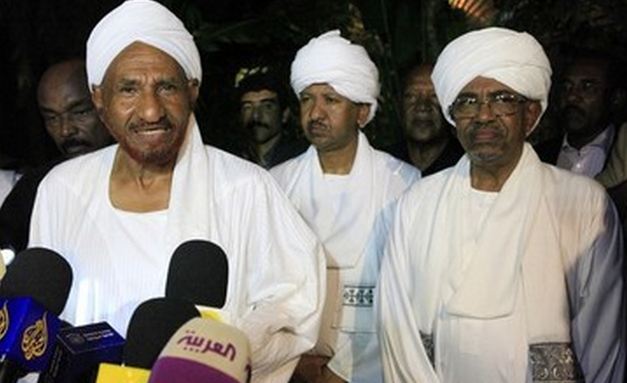 Opposition Umma Party leader and former Prime Minister Al-Sadiq Al Mahdi speaks during joint news conference with Sudan’s President Omar al-Bashir (R) after their meeting at Mahadi’s house in Omdurman August 27, 2013 (REUTERS/Mohamed Nureldin Abdallah)
<p>The opposition National Umma Party (NUP) rejected the amendments approved by the Sudanese parliament last week calling it mere "distortions" that harmonized the interim Constitution of 2005 with the actions of the government which consistently breached its articles.</p><p>In a statement received by&nbsp;<i>Sudan Tribune</i>, the NUP said the amendments publicly reveal the case of wandering, isolation and anxiety suffered by the ruling National Congress Party (NCP).</p><p>The NUP said it has formed a committee that is working on a detailed study of the amendments and their impact on the political, legal and international situation of the government.</p>
Read the full article here: Sudan Tribune