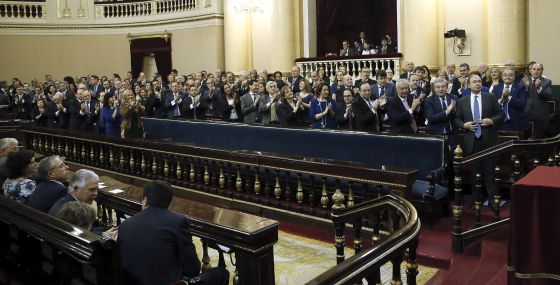 Spanish Senate on 13 January 2016 (photo credit: Fernando Alvarado (EFE)
<p>During a constituent assembly of Spain’s Congress,&nbsp;<a href="http://elpais.com/elpais/2016/01/13/inenglish/1452673886_901645.html">such as the one that took place today</a>, new deputies are required, one by one, to state that they will abide by the Constitution. The formula used is a “promise” or “swearing” to adhere to Spain’s Magna Carta. But today, all of the deputies of emerging left-wing group Podemos and its affiliated deputies added a postscript to their declarations.</p><p>“I promise to abide by the Constitution and work toward changing it,” said many. In the Senate, meanwhile, some parliamentarians – also from Podemos and its regional platforms – made their statements in Castilian Spanish, Basque, Catalan or Galician.</p>
Read the full article here: El Pais