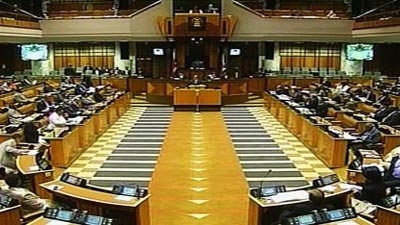 South African Parliament (Photo credit: SABC)
<p class="intro">Parliament resumes business from Tuesday for a term in which the “nomination of a new public protector will take centre stage”‚ and a “review of the Constitution” is also on the agenda.</p><p>Also scheduled for the six-week term is work on “legislation and bills referred back to Parliament because of issues with the processes followed in passing these”‚ a statement said.</p><p>While upcoming “meetings of the programme committees of the National Assembly (NA) and National Council of Provinces (NCoP)” will outline a more detailed schedule‚ “plenary sittings earmarked so far include questions to the executive for oral reply in the NA and in the NCOP”.</p>
Read the full article here: Times Live