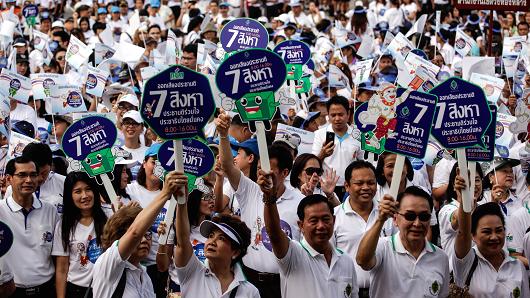 Civil servants and military school students attend a Thai constitution referendum promotional event (photo creit: Dario Pignatelli | Getty Images)
<h1><i>A Conversation with Prof Tom Ginsburg and Mr Khem­thong&nbsp;Tonsakul­rungruang</i></h1><p><span style="line-height: 20.4px;">In anticipation of Thailand’s referendum on its draft Constitution, I had a conversation with two constitutional experts, Prof Tom Ginsburg and Mr Khemthong Tonsakulrungruang, about its process and content, as well as the possible political consequences of the referendum. The referendum is set to take place on 7 August 2016.&nbsp;</span></p><div><p><strong><em>Given that a modern constitution is expected to be not just a fundamental law but also a social contract amongst citizens, how successful is the draft Constitution in addressing the underlying divisions in Thai society?&nbsp;</em></strong></p>
Read the full article here: International IDEA