Nepal’s Protesting Minorities Are Close to a Deal With the Government, Leaders Say 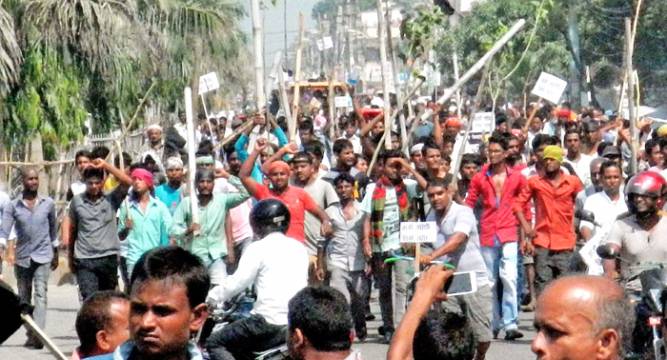 photo credit: News Nation
<p>Representatives of the agitating ethnic minority in Nepal, whose protests on the South Asian nation’s border with India have cut off key supplies for months, said Sunday that a deal with the Nepali government may be&nbsp;<a href="http://www.nepalitimes.com/blogs/thebrief/2016/01/10/deal-within-reach/">“within reach”</a>&nbsp;following a three-week dialogue that seems headed in a “positive direction.”</p><p>A joint task force comprising members of the Madhesi community on one side and the country’s three leading political parties on the other have discussed the 11-point agenda put forth by the former over the past week, reports the<i>Nepali Times&nbsp;</i>newspaper.</p><p>“We are closer to an agreement,” Deputy Prime Minister Bhim Rawal told the&nbsp;<em>Times</em>.</p>
Read the full article here: Nepali Times