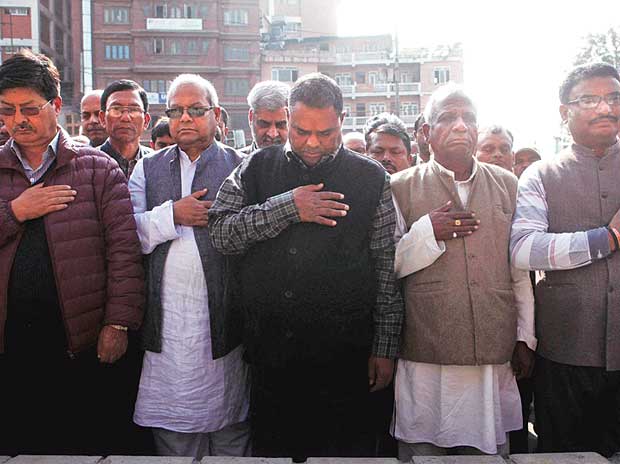 Nepalese Madhesi leaders and supporters observe a minute of silence in the memory of people killed in South Nepal protest in Kathmandu, on 23.11.2015 (photo credit: Business Standard)
<p>&nbsp;</p> <p>&nbsp;</p> <p>A meeting in this regard of the national legislature is scheduled for Thursday. The Nepali Congress' officiating head, Ram Chandra Poudel, said the meet decided to seek an agreement with Madhes-based parties before making changes in the Constitution.</p> <p>&nbsp;</p> <p>The ruling and opposition parties would hold talks with the agitating Madhesi parties separately, local media reported.</p> <p>&nbsp;</p> <p>This might resolve the crisis that has led to massive shortages of essential items after Madhesis blocked transit routes from India to the landlocked country. The protests have also led to violence, in which about 50 people have lost their lives.</p> <p>&nbsp;</p>
Read the full article here: Business Standard