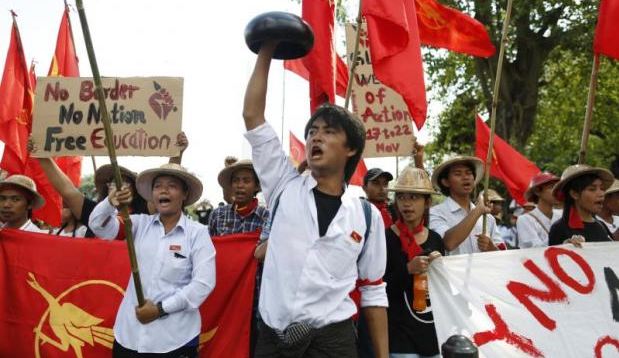 A Myanmar student carries a monk's alms bowl turned upside down over his head, a symbol of protest during a rally against education laws in Yangon. Social and political tensions in Myanmar are escalating and demonstrations have become an almost daily event. REUTERS
<p><span>With elections planned for this time next year,&nbsp;Myanmar's future is at a critical crossroads. At the same time, there is increased confusion over attempts to change the constitution and introduce proportional representation rather than the first past the post system as in previous elections.The speaker of the lower house Shwe Mann has announced there will be a referendum in May next year on some proposed amendments to the constitution, but that the charter will remain relatively unchanged before next year's election.Meanwhile, the National League for Democracy (NLD) is continuing its campaign to change the constitution, although it concedes this is unlikely before the next election.</span></p>
Read the full article here: Bangkok Post