Myanmar to embark on a new chapter as parliament convenes 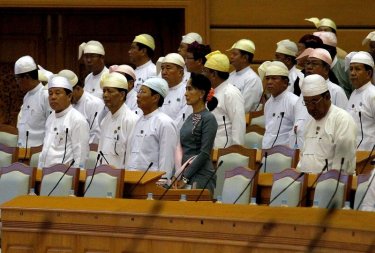 NLD party leader Aung San Suu Kyi attends Myanmar's first parliament meeting after the November 8 general elections, at the Lower House of Parliament in Naypyitaw (photo credit: REUTERS)
<p>On Monday Myanmar will convene its first popularly-elected parliament in more than half a century, a historic moment unthinkable just five years ago in a country locked under decades of military rule.&nbsp;<span style="line-height: 20.4px;">Myanmar’s powerful army overthrew the last democratically-elected parliament in 1962. The rule of the junta was characterised by economic mismanagement and the oppression of the country’s citizens.</span></p>
Read the full article here: REUTERS/Business Insider