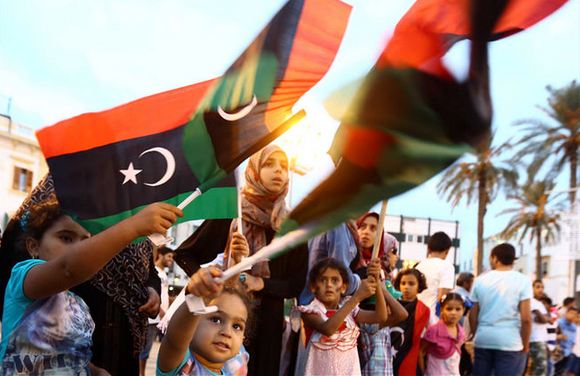 Libyans wave the national flag in Tripoli during celebrations for the third anniversary of the revolution's end on October 23, 2014. AFP/Mahmud Turkia
<p>Read the article in <strong><a href="http://goo.gl/402uQy">Arabic&nbsp;</a></strong></p><p>Benghazi, al-Marj and a number of other cities in eastern Libya are holding workshops on the new constitution.</p><p>The Committee of 60, which is tasked with drafting the landmark document, has been meeting with civil society groups to listen to their views and add amendments.</p><p>One such workshop wrapped up January 12th at the al-Marj Hotel. Organised by the Morouj Organisation of Women, it reviewed the progress of the draft.</p><p>Attendees expressed their resentment concerning the ambiguity of the proposals submitted by the committees. Participants also voiced surprise at the failure of the body to organise a referendum on the form of government.</p>
Read the full article here: Magharebia