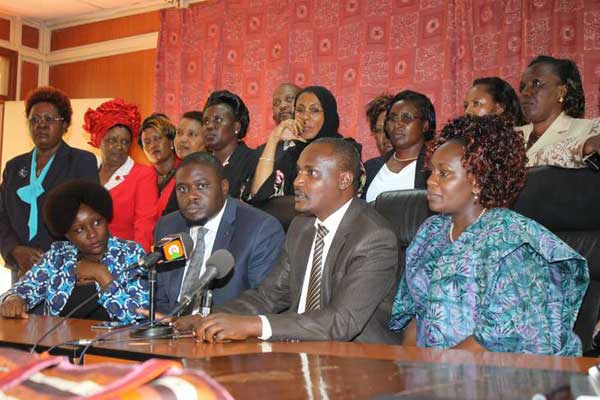 Cord and Jubilee MPs during a press conference on the two-third gender rule on May 5, 2016. The Bill to implement the gender principle has now failed to pass in the National Assembly and Senate (Photo credit: Anthony Omuya | Nation Media Group)
<p>Senators on Wednesday failed to vote for the two thirds gender rule, after lacking the quorum to pass a constitutional amendment for the nomination of more women MPs.</p><p>There were 22 men and six women in the Senate of 67 members, prompting Deputy Speaker Kembi Gitura to defer the vote for another day, putting on ice the vexing Bill by Nominated Senator Judith Sijeny.</p><p>The Constitution of Kenya (Amendment) Bill seeks to have more women nominated to Parliament through party lists, progressively, and be reviewed after 20 years, to meet the gender rule, providing that not more than two thirds of one gender fill up elective and appointive positions.</p>
Read the full article here: Daily Nation