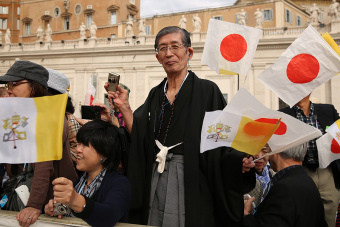 Photo credit: Patheos
<p>In the shadow of the 71st anniversary of the dropping of the atomic bombs and the end of World War II, the Japanese bishops have warned against legislative proposals they believe will cause their nation to become further entangled in world violence.</p><p>In a message signed by Archbishop Joseph Mitsuaki Takami of Nagasaki, president of the Japanese bishops’ conference,&nbsp; the bishops said that “appropriate steps are required to be taken constantly” in light of issues of violence and discrimination which occur in Japan “on a daily basis.”&nbsp;<span style="line-height: 20.4px;">“We must not fail to be wary of security-related laws and the movement to change the Constitution which will inevitably involve the Japanese people in the cycle of violence,” the statement reads.</span></p>
Read the full article here: Patheos