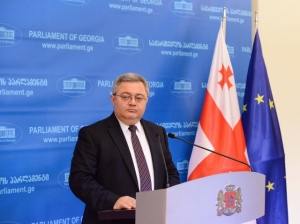 David Usupashvili, Georgia’s Parliament Speaker (Photo credit: Georgia Today)
<p>David Usupashvili, Georgia’s Parliament Speaker from the Republican Party, has said amendments should be made to the Constitution that will state Georgia’s Pro-NATO and Euro-Atlantic aspirations.</p><p>The Speaker made the statement in response to the leader of the Democratic Movement 'United Georgia,' Nino Burjanadze, who said Georgia should be neutral and should not become a member of any alliance.&nbsp;<span style="line-height: 20.4px;">Former parliament Speaker, Burjanadze, and her supporters are going to collect signatures in order to have the initiative defined in the Constitution. At least 200,000 signatures are required for a constitutional amendment to be initiated.</span></p>
Read the full article here: Georgia Today