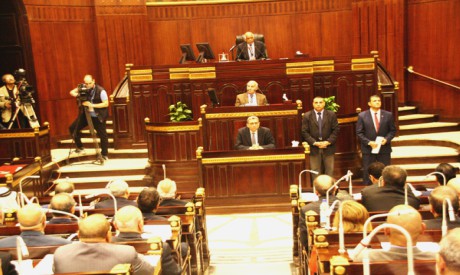 Egyptian Parliament (photo credit: Ahram Online)
A final parliamentary vote on changing the 2014 constitution is expected on 14 April. Following a vote on the 2017/2018 budget this week Parliament Speaker Ali Abdel-Aal told MPs that “our next sitting will be held on 14 April and I think all of you will be keen to attend the historic meeting”. “It will be a very important plenary session and attendance is essential.” A two-thirds majority of MPs in favour of the amendments is needed for them to pass. “Parliament took a provisional vote on 14 February and, in line with the constitution and parliamentary rules, a final vote on the report of the draft of the constitutional amendments must be held within two months,” Abdel-Moneim Al-Oleimi, independent MP and a member of parliament’s Legislative and Constitutional Affairs Committee, told Al-Ahram Weekly. A two-week consultative process on the amendments concluded on 28 March.
Read the full article here: Ahram Online