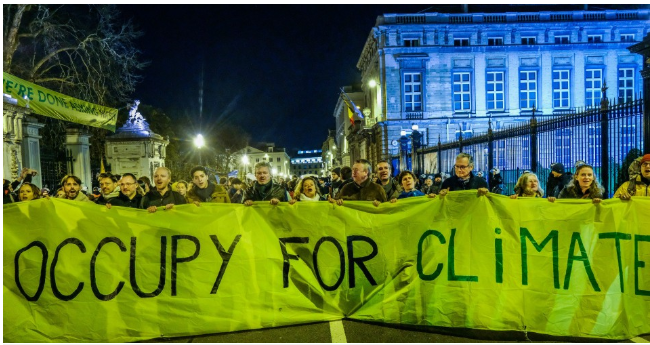 Belgian climate campaigners (photo credit: Greenpeace Belgium)
Belgian activists in Brussels are participating in Occupy for Climate to pressure members of parliament to support a constitutional revision that would allow the country to adopt an ambitious climate law with binding targets. "We are done asking nicely" is the rallying cry of the movement, led by national chapters of Greenpeace and Extinction Rebellion as well as other youth and environmental groups. Last week, the party MR (Reformist Movement) had indicated it would not support the constitutional amendment, with MR Prime Minister Charles Michel instead favoring a nonbinding agreement. However, under pressure from occupiers on Monday, the party announced its support for the revision.
Read the full article here: Common Dreams